By: Diane Harvey, our fearless justice leader from Perth, Australia

I had the opportunity to go to Cambodia in a team of six from Perth, Australia. We went to visit two projects, which are supported by Baptist World Aid Australia. Lisa has allowed me to write three posts for you. This one will be about PNKS, the second will be about Peace Bridges and the last one will be about two other organisations doing great work that I found while I was there.

I really didn’t know what we were going into. This was my first trip to a third-world country. I shouldn’t have worried. My team leader and the partner organisations did a great job of planning the itinerary and showing us around.

It was called an “Exposure Tour”. We weren’t there to do anything as such, just to observe, listen, learn and ask questions. It wasn’t all hard work either. We did some sightseeing on tuk-tuks, took a ton of photos and were able to Skype the kids at home every night from the Wi-Fi in our comfortable hotel room.

The first organisation we visited was called PNKS (light of hope). They are a Cambodian Christian NGO working in community building, agriculture and livelihoods training and health. We were out in the rural areas, guests to their community meetings and got to observe some things that PNKS have introduced to help build the communities.

Climate change is a big issue in these communities. Rainfall used to be predictable and the rice harvest as a result used to be predictable, but now late rains could mean poor crops. PNKS is working with the locals to teach/share farming practices, skills and techniques, work towards diversification of crops, so families might plant vegetables and have a fish pond as well as just the rice field.

Communities were also taught in monthly meetings about various topics such as health care, civil rights, domestic violence, and other things. The communities also had the opportunity to have a shared savings account, which had lower interest than what was offered by the microfinance institutions. We heard one example of this being used when the community needed funds for a funeral.

I really loved visiting the rural communities and having the chance to talk to some people who were happy to show us the improvements that PNKS had brought to their communities. In one community meeting I asked what was their greatest need, and they said that they needed consistent rain for the remainder of October for their rice crops. You can imagine our collective joy when it started to pour down! 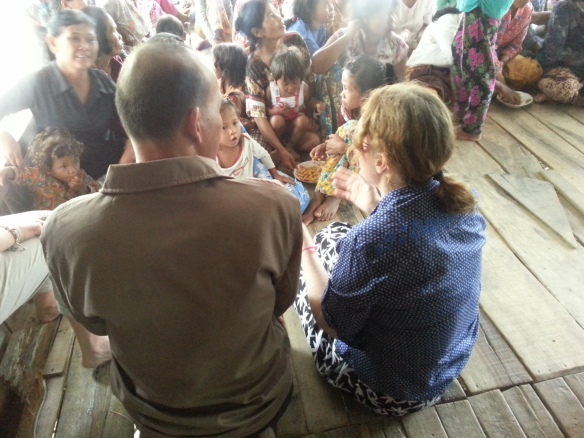 This photo is of me talking to the community ladies. I am wearing a blue blouse and the translator is on my left.

The other photo is of the savings group. If you would like more information on PNKS, there is a good article here.

4 thoughts on “Light of Hope”