My little guy will be six at the end of May. Not so little anymore and determined to ride his bicycle this summer without training wheels. He worked really hard that first afternoon, but did not quite get there. Will he by this summer? I have not doubt. I have complete faith in him. Something so new takes time to learn. Skill is built by practicing again and again. It takes time.

I love how his eyes are closed. In his pocket are two beanie boo stuffed animals, from his sister for good luck.

In our culture of having everything at our fingertips right when we want it, waiting can be hard. We sometimes even fight that feeling of entitlement that whatever we are doing should happen immediately.

While paging through an old National Geographic I came across an interesting photograph.

In Tibet lies the Pelkor Chode Monastery, a structure that dates back to the 9th century. A tradition of those who pilgrim there is to crawl beneath sacred texts of Buddist scripture to “absorb the wisdom.”

If only life were that simple and surface.

Instead, we get skinned knees, frustration, and intensely long waits. 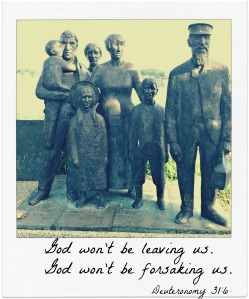 Kris asked Josiah if he was ready to try again the next day. He said yes, I think I saw his eyes closed again.

I want to be that in my life. Even if the future scares me a little bit, I want to say yes, even if I have to shut my eyes. It’ not easy. God never promised easy .

We can move forward because we know God won’t be leaving us.

God won’t be forsaking us.

What do you need go back to and keep trying?

Or more fun what would you “absorb”?

12 thoughts on “He’ll Not be Leaving or Forsaking.”